The Arwood Story, How it All Began

Home » Locations » General » The Arwood Story, How it All Began 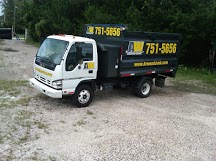 It all started when father and son began cleaning up metal factories in 1984. They thought of a way to recycle metal while offering clean-up services to the factories through dismantling old cranes, tanks and rail systems. Their exceptional service brought more business when factory owners contracted them to remove waste as well. They invested in roll-off trailers as a mean to accomplish this. With the resources to haul more waste, they began to seek out more opportunities for hauling. This led them to begin site clean up and hauling for home builders.

John C. Arwood, an American Indian, who grew up in the foothills of West Virginia as a Coal Miner’s son, understands what hard work is all about. His father taught him, “If you don’t work, you don’t eat.” He moved his family to Florida in the early 70’s where he took a job as a welder for Buffalo Tank. And this is where it all began.

Recycling has been a passion of John D. Arwood since he was a child. Even then he recycled aluminum cans and coke bottles while traveling around the neighborhood on his bicycle. This passion has motivated him to grow Arwood Waste & Demolition to the business it is today.

Rent a Portable Toilet Near You!

Discover discounted pricing in your hometown! Enter your zip code above.